1. Strathcona - Located in the South-Central area of Edmonton, Alberta, Canada is a lively neighborhood called Strathcona. The University of Alberta is conveniently located directly to the West of Strathcona. The ever popular Whyte Avenue is the center point for this area bringing life, culture and excitement to the community.

2. Glenora - Glenora is a great residential neighborhood in west Edmonton. Besides, its prime status of a neighborhood, it also has a scenic touch. The scenic touch comes from the Saskatchewan River valley. The river is just one of the natural scenes; it is also accompanied by the McKinnon Ravine. However, the natural charm of this residential area of Edmonton, Glenora offers many other features.

3. Oliver - Oliver is one of the oldest residential neighborhoods in Edmonton, Alberta. The community was named after a businessman and politician, who lived there, Frank Oliver. The southeast portion of Oliver is named Grandin. Oliver offers many residents an ideal home. It has a natural charm (thanks to the Saskatchewan River valley), a historical past, and great access to the downtown core of Edmonton, Alberta.

4. Westmount - Westmount is one of the older neighbourhoods in Edmonton being built around 1910. It is a very convenient and centrally located place to call home with the North Saskatchewan river close by, as well as being so close to Downtown. This neighbourhood has been going through a revitilization period with some home owners building new construction or rehabilitating their current homes.

5. Highlands - Overlooking the North Saskatchewan River valley in Northeast Edmonton is the residential neighborhood of Highlands. Roughly 1/3 of the Highlands were built prior to the end of WWII, and about 1/2 of the neighborhood was built between 1946 and 1960.

6. Ritchie - Ritchie is a residential neighborhood in south east Edmonton, Alberta, Canada. It is named for the original owner of the Ritchie Mill and former mayor of the City of Strathcona. The neighborhood is bounded on the north by Whyte Avenue, on the south by 72 Avenue, and on the east by the Mill Creek Ravine. The west boundary, south of 79 Avenue runs along 100 Street. North of 79 Street, the west boundary runs along 101 Street and 102 Street.

8. Garneau - The neighborhood of Garneau is exceptional if you are looking for a home for sale. This older French inspired neighborhood boasts evidence of Métis history, yet younger people are finding it attractive.  Edmonton homes in this area are mixed with high rise condominiums, apartments, as well as single family homes with beautiful elm and ash trees that make this neighborhood desirable for both the young and older generations.

10. Crestwood - Crestwood is a beautiful neighbourhood in west Edmonton, and overlooks the North Saskatchewan River. The homes are older being built between WWII and 1960. 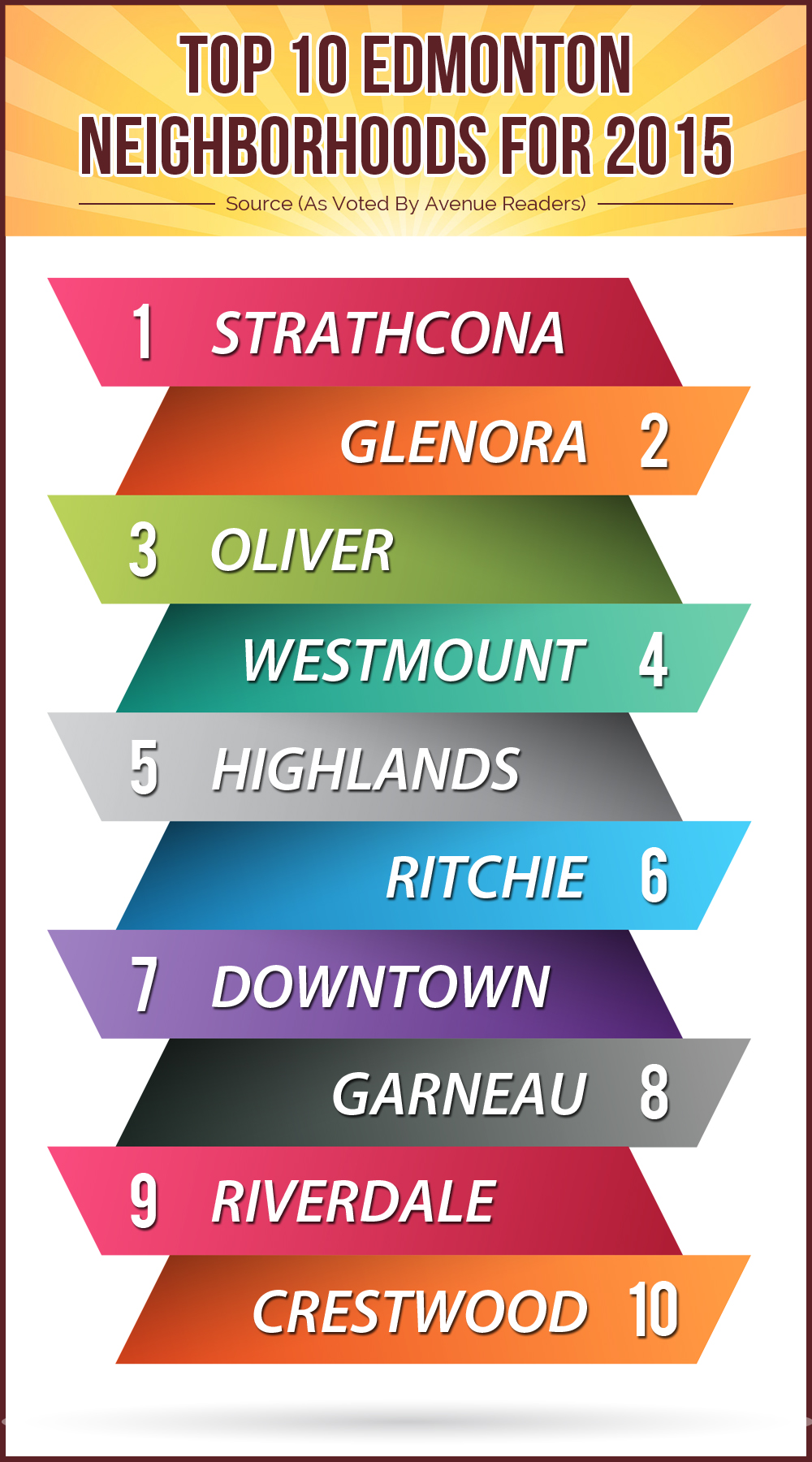